Note: This article was written by Andrew Farr, associate editor of Utility Infrastructure Management (UIM). This article originally appeared in the February 2015 article of UIM, available at the following URL:
UIM article link

In the most general sense, a model can be defined as a representation of something real.

While building models is nothing new, when it comes to water and wastewater utilities, the idea of emulating a system in order to simulate a real-world situation without risk is a concept that is becoming essential for ideal decision-making.

A hydraulic model, in many ways, is exactly what it sounds like — a digital model of a water distribution or wastewater collection system. Hydraulic models can illustrate the effects of changing conditions of a system, and, among other things, display information about pipes, pumps, valves, flow, pressure, water quality and more, shown in software platforms using color-coded network maps, data tables and graphs.

Today, almost every water and wastewater system has a hydraulic model that it uses for decision support. Some examples might include EPANET, the U.S. EPA’s public domain water distribution modeling software, or WaterGEMS, a common industry application from infrastructure software company Bentley Systems, to name a couple. According to industry experts, one of the challenges with hydraulic modeling today is dealing with the massive amounts of data available to build an accurate model. With the evolution of smart metering, detailed GIS data sets and more universal SCADA systems, the industry-wide initiative seems to be focused on breaking down information silos so that data and models can be more easily shared within utilities.

As hydraulic modeling continues to become a necessary component of utility management, it’s worth examining the background and some current trends in the functionality, applications and data integration capabilities of this technology. 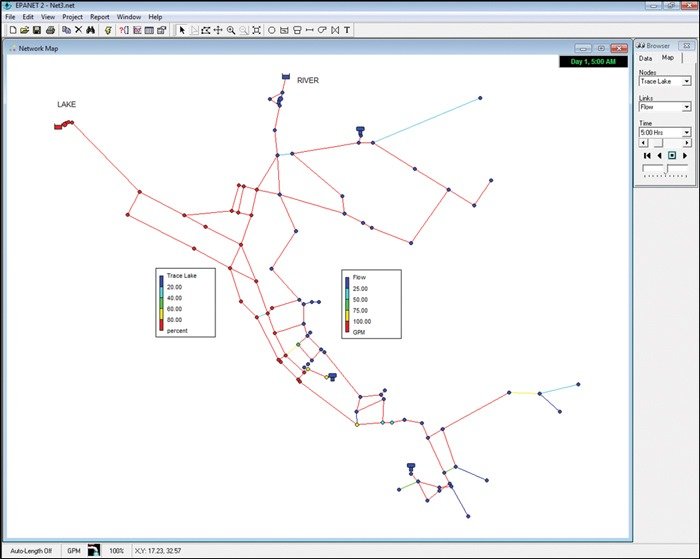 Early concepts of water distribution modeling can be traced back to the early 20th century when engineers were beginning the push for better organization and documentation of pipeline systems and developing numerical systems for planning and design.

“A hundred years ago, engineers could not perform very detailed analyses so they needed to rely heavily on rules-of-thumb and very conservative design,” says Dr. Tom Walski, senior product manager at Bentley Systems. “Computations were very tedious and engineers were limited to analyzing highly skeletonized systems with only a handful of pipes and loops. Nowadays, engineers can quickly analyze systems with hundreds of thousands of pipes and loops.”

According to Walski, one of the first systematic numerical methods for building models was developed by Hardy Cross, a civil engineering professor at the University of Illinois in the 1930s. When the first computers came along in the 1950s, the ‘Hardy-Cross method’ was computerized.

“Since then, more powerful and efficient matrix solver methods have been developed,” says Walski, who is the co-holder of seven patents in the area of hydraulic analysis and has nearly 40 years of experience working in water distribution and modeling. “The first models worked for a fixed head source and a relatively small number of pipes under constant conditions. Then, the ability to model pumps and regulating valves was added. The next advance was the addition of time simulation. However, it was still necessary to skeletonize system descriptions.”

Walski says the evolution of hardware has also matched that of software, referring to the technological developments of computers that occurred from the 1960s and 70s onward as significantly impacting the ability to create a software platform with a more efficient interface.

“In the early days, working with punch cards and mainframe computers was very tedious and error prone,” he says. “Time sharing computers helped a bit, but the coming of personal computers made modeling more convenient and graphical user interfaces made it possible to clearly display results as opposed to scrolling through pages of tables. With the dramatic increase in computer power, model runs that would have taken days are now performed in seconds and models are now amazingly large while simulating great detail.”

By the 1990s, water quality calculations were the next advance. Since then, more features have been continually added such as scenario management where a user can store many different scenarios in a single model. Walski says integration of modeling with Geographic Information Systems (GIS) and more recently, Supervisory Control and Data Acquisition (SCADA) systems have made the work of modeling easier and more powerful.

“Since that time, most of the advancements have been not so much in the modeling but in integrating data sources so you don’t have to enter in data manually,” he says. “Integrating GIS was big about 10 years ago, and now, operational data from SCADA systems is where the evolution is. With modeling, design and planning has always been the main use, but now we’re really seeing the [shift] to integrating more operational data.”

Operational data — referring to the ability of the model to view and analyze more accurate, up-to-date information from various data platforms — seems to be one of the major shifts in hydraulic modeling. It’s a shift that can likely be attributed to the technological advancements of enabling integration points, starting with the ability to map a system, connect to a sensor and mimic operational performance of a water system within a model.

Perhaps no one knows this better than Paul Hauffen, who has built his business around the concept of modeling as an operational and strategic decision-making tool for utility management. Hauffen is founder, president and CEO of IDModeling, Inc., a global smart water network software company based in Arcadia, Calif., that delivers water and wastewater modeling solutions through its Sedaru , a software-as-a-service that brings water data analytics together within a single platform and through a real-time connection.

In looking at the evolution of this technology, Hauffen says much of the basis came from systems like KYPipe, and later,
EPA’s EPANET, which set U.S. and international industry standards for hydraulic simulations of distribution systems.

The KYPipe program was developed by Don Wood at the University of Kentucky in the 1970s and was widely used throughout the 1980s. It was also the numerical solver used in the popular Cybernet program from Haestad Methods (now Bentley Systems) in the late 1980s which merged the U.K. solver with a CAD program for the first real graphical user interface. Hauffen says that as EPANET was developed further in the 1990s, it also became a credible and reputable hydraulic simulation engine.

“By the 80s and 90s, other pain points in modeling began to be addressed,” says Hauffen, who has more than 20 years of experience in the water industry, primarily in software and consulting for hydraulic modeling, including work with innovative modeling software developer MWH Soft (now Innovyze). “Systems like KYPipe and early versions of EPANET didn’t have much of a map. It wasn’t punch cards, but it made the evolution to digital. Then, you had companies like Haestad Methods and MWH Soft that developed software that took EPANET and incorporated a database and a map. Then, you could actually click on a pipe and the model would tell you pipe size, the year it was installed, flow, velocity, pressure, water quality and all sorts of information to allow you to virtually monitor your water system.

“Today, fundamentally these softwares haven’t changed much,” Hauffen continues. “It’s still a database and a map focusing on the engineering department. But where the industry is changing now is the integration points and the trend towards real-time data for operations.”

Establishing the concept of a real-time connection between information systems as an industry standard is what Hauffen believes to be the future of modeling. It’s the basis for IDModeling’s Sedaru   (an acronym for the phrase, See Data Run) modeling software that is used by water utilities to monitor key performance indicators and communicate information to anticipate events and coordinate prioritized action for operations. Operations and maintenance personnel can set real-time and predictive mobile alerts with Sedaru  and use GIS mapping and SCADA to address water quality issues, energy use, water loss, emergency events and more.

Hauffen says real-time connections and simulating “what if” scenarios is what will start to remove the difficulty and challenge of constantly updating modeling information.

“Without real-time information, your model is always a representation of the last time you updated it, which makes it a representation of some other time in the past,” he says. “Now, with interoperability, integrations, web-based connections and web services, we have more and more ability to make sure that model has fresh data. So when utilities run the simulation, the level of confidence they have in their decision-making increases exponentially.”

Perhaps one of the most interesting and unique aspects of modeling today can be demonstrated through Sedaru ’s predictively driven forecasting capability, and the ability to run scenarios through the model in order to better understand the potential outcome of making decisions.

“A utility’s job is to maintain and operate its infrastructure,” Hauffen says. “So when a pipeline, for example, needs to be put out of service because they need to install other utilities or dig up the street, they need to know what’s going to happen when they take that pipeline out of service. They need to know what customers are going to be affected and what facilities change and get affected. With the model, they can address how to reroute flow and how to address the drop in pressure by turning on a pump. That’s one very common example.

“What’s exciting about this trend is to not only run the model, but to use the model in a predictive fashion and surround the model with a whole platform for business operations to respond to an event in half the time or a fraction of the time you otherwise would without a system like this in place.”

And Walski agrees, reiterating that despite the increased functionality, the accuracy and efficiency of models is still dependent on the data that is entered.

“Models are as accurate as the input data that the user feeds into them,” Walski says. “The fundamental law in modeling is GIGO — Garbage in, garbage out. Problems with models are usually problems with data.”
So where’s all this heading? Walski says he is fascinated by today’s shift in the use of hydraulic modeling tools from design and planning to more operational applications.

“Modeling has traditionally been the purview of engineering — determining pipe sizes, developing master plans and evaluating system expansions,” he says. “But there are numerous uses in system operations as well, such as energy management, emergency response and operator training. We are adding tools to better bridge the gap between engineering and operations.”

As for this modeling technology replacing engineers completely, Walski says it’s highly doubtful. “The most powerful tool for designing and operating water systems still lies between the engineer’s ears.”

About Sedaru: Sedaru is the leading smart water enterprise software and provider of predictive analytics content for the smart water industry. Sedaru propels the internet of things to prepare water/wastewater utilities for their mission critical tasks and to take control of what happens next™. Sedaru saves failing infrastructure, reduces water loss and energy costs, enables compliance, and powers informed decisions across the utility enterprise.

Would you like to sign up to receive periodic Sedaru Real-Time News and Updates?
Please email: info@idmodeling.com. 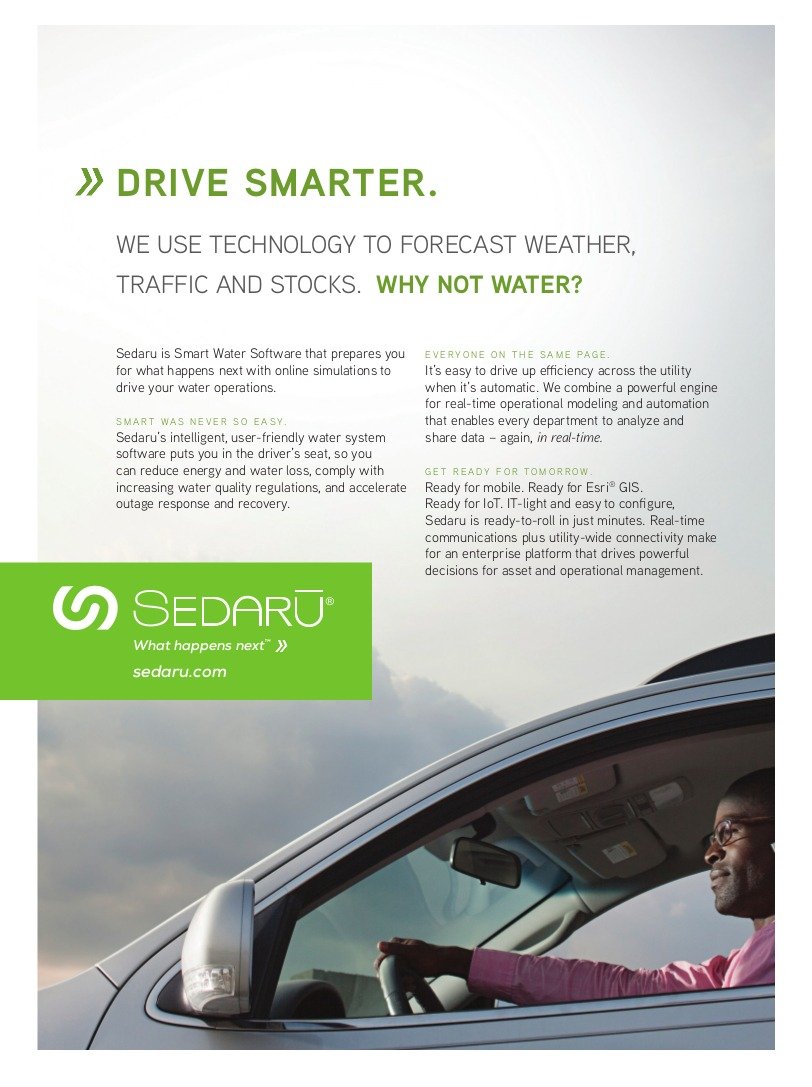